Three Sure Ways to Defeat Gas in Dragon Ball Super

Goku and Vegeta have a lot of trouble fighting Gas in the Dragon Ball Super manga. Gas is the leader of the Heeters and one of the strongest villains that the two beloved Saiyans ever had to face, if not the strongest one. Defeating him seems close to impossible even while using Goku’s Ultra Instinct or Vegeta’s Ultra Ego.

When Goku and Vegeta achieved those two techniques, they barely had any possible rivals. The two fighters seemed untouchable. So how can Gas be even stronger than them? Actually, the explanation is pretty simple.

Gas gathered the Dragon Balls in order to become the strongest being in the Universe. And boy, oh boy, did that dragon have a lot of work to do! He made Gas stronger than anyone, probably even stronger than the gods and angels. Therefore, is there any possible way to stop such a menace? Luckily enough, Dragon Ball always shows a way when anybody else gives up all hope.

We thought about three sure ways to get the job done when it comes to defeating Gas:

Those who started to watch Dragon Ball directly with Super might not know about Majin Buu’s dark past. That fat guy who always sleeps was one of the terrifying villains back in the day of Dragon Ball Z. His most feared technique is the one that can cause his victims to transform into candies and chocolate. It’s all done with a simple laser beam from Buu’s head, and it should work on Gas as well. It doesn’t matter how strong the opponent is; he is pretty much doomed if the beam hits him.

Therefore, bringing Majin Buu to confront Gas isn’t hard. The only problem is that Goku and Vegeta need to find a way to wake Buu up from his long slumber. Kamehameha and the Final Flash might be way too weak for such a mission!

If you can’t kill Gas, sealing him away from the world can be just as helpful. The Evil Containment Wave (aka the Mafuba) is a technique used by Master Roshi long ago to capture King Piccolo in a jar so that he would no longer terrorize the Earth. The Mafuba was brought back in Dragon Ball Super after many years – we’ve seen it in both the Goku Black arc and the Tournament of Power arc. It has been somewhat confirmed that the attack should work on pretty much any opponent, regardless of how strong he is. Goku learned the technique as well from Master Roshi, so we see no reason why the beloved Saiyan wouldn’t use it on Gas.

Leave it for Ultra Vegito

A lot of fans had been speculating online about what a fusion between Ultra Instinct Goku and Ultra Ego Vegeta would look like. Those are the strongest transformations of the two Saiyans, so why not combine them by using the fusion technique? We haven’t seen anything that would look and behave like Ultra Vegito, but you know what they say that everything has a beginning in life. We’re pretty sure that Vegito combining the powers of Ultra Instinct Goku and Ultra Ego Vegeta would be able to take down Gas without even breaking a sweat. For the worst-case scenario, the Heeter might still have a few tricks up his sleeve in the form of new transformations, but that would most likely still not be enough for the new and improved Vegito.

However, we still need to take the idea of “Ultra Vegito” with a grain of salt. Ultra Instinct and Ultra Ego are still two transformations that are radically different, and there’s no telling how they would be able to match one another in a fusion. But Dragon Ball is known for defying all logic when it needs to!

Let’s just hope that Goku or Vegeta will find out about these ways of defeating Gas! 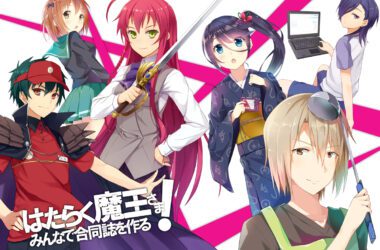 Table of Contents Hide Season 1 recapWhen will season 2 be released? The Devil is a Part-Timer Season…