More and more crossovers have been added to Fortnite as time has progressed, with WWE’s John Cena now available in the game’s goods store. Fortnite also published a clip depicting John Cena making a WWE-style entrance inside the battle royale setting.

The first WWE hero to be introduced to Fortnite’s item store is the 16-time world champion John Cena, and his skin incorporates one of his signature shirts as well as a shirtless edition. Due to his prominence as a WWE wrestler for over two decades, many Fortnite players looked forward to his arrival in the competitive game. Besides the new John Cena skin, gamers may also get a WWE-themed Harvesting Tool and Back Bling to use in Fortnite.

The promotional film for the John Cena skin in Fortnite is a spoof of his entrances at Wrestlemania 25, with his shadow emerging through a smoky door and walking between two rows of bowed Cenas. John Cena’s “you can’t see me” hand motion, which he does after crossing the finish line, is now selectable emote used by victorious players. The video then goes on to show John Cena using his flex, as well as the True Love and Finger Guns emotes, to eliminate other prominent Fortnite skins, with some of the eliminations taking place in a wrestling ring, as would be proper.

Additionally to the skin, variation, and emote, Fortnite fans who buy the John Cena package will get a hand-shaped harvesting tool with Cena’s motto on it, and also a WWE championship belt that may be donned by non-wrestling skins if they ever felt that Jonesy deserved to be champion. John Cena’s image has previously been featured in Fortnite as a cosmetic item when he portrayed the DC Comics character Peacemaker. This item was introduced in Chapter 3 of Season 1. It is presently unknown whether Fortnite plans to add additional WWE skins to the battle royale, but given his popularity, John Cena may have become one of the most demanded wrestlers.

Numerous Fortnite gamers, both active and inactive, have expressed their excitement about the WWE superstar John Cena’s upcoming addition to the game’s roster. While many comments on the Fortnite John Cena teaser praised the clip’s production values, several pointed out that the wrestler’s invisibility might be an unjust detriment for players who purchase his skin. 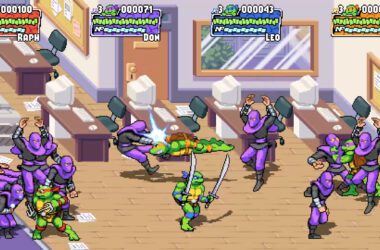 If you remember trying to defeat Shredder on the NES console when you were a kid, it means…