HBO’s The Last of Us is quite late, since the production has taken a break from filming the show over the holidays. But is there a chance we’re getting scenes from the prequel, Left Behind?

A source on Twitter has posted a short clip that’s coming from a crew member who is standing in front of a mall store. It looks completely damaged – just like the one from The Last of Us‘ prequel, Left Behind. The crew member is wearing a jacket with the “The Last of Us Season 1” message on it.

Rumor has it, we could see some throwback scenes from Left Behind – possibly with Ellie and Riley – but it might be from the Winter chapter. This chapter focuses on Ellie, who tries to find medical supplies for Joe in the mall in Colorado. As you remember, Joel was injured in an ambush.

We’re grateful we get to see insight into the new series, and we cannot wait to find out more. We’re hoping to get a trailer soon.

As of now, we don’t have a clear release date, but we do know that it should be showcased in 2022. The production of the series has resumed and we’re all happy to learn more every day from behind-the-scenes content.

The action takes place 20 years after modern world has forever changed. Joel is hired to take Ellie out of an oppressive quarantine zone. The story complicates, and then they have to depend on each other for survival while crossing the U.S. 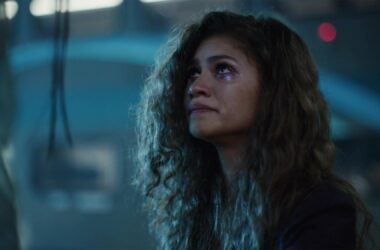 Zendaya has undoubtedly shown a new side to us in Euphoria. The characters were well developed. The show’s…