RNA building components have been discovered in a molecular cloud near the Milky Way’s nucleus, according to a study team. Theories concerning the origins of life on Earth and maybe elsewhere might benefit from this revelation.

G+0.693-0.027 is the name of the molecular cloud. An international team of scientists from the fields of astrophysics, astrobiology, and chemistry surveyed the cloud utilizing two telescopes in Spain.

A single-stranded molecule, Ribonucleic acid (RNA) is found in all living cells and functions in a similar way as DNA. Based on laboratory findings of ribosomes, which are composed of RNA, there is an indication that RNA may have predated DNA.

Ancient RNA may or may not have sparked life, but that is a question for another day. New research shows that the early cosmos may have had multiple nitriles, an organic compound that may have played a key role in producing DNA and RNA. These results were confirmed today in Frontiers in Astronomy and Space Sciences and may provide light on the origins of RNA in the universe.

There are many theories on how life began, but one popular one is the RNA world theory. In the 1990s, a few studies suggested that RNA may have sparked life as we know it since it functions like DNA in the genetic sense but catalyzes processes in the chemical sense. The hypothesis has its flaws, but it’s still intriguing to think about.

Ancient bacteria created stromatolites, which are sedimentary concretions formed as they grew 3.5 billion years ago. It wasn’t until stromatolites were developed that life was able to begin on Earth. The Late Heavy Bombardment is a time in Earth’s history during which the necessary components for life first arrived on the planet roughly 4 billion years ago (give or take a few hundred million years).

Asteroids and comets crashed into Earth and the Moon during the bombardment, leaving their imprint on the planet’s crust (and the surface of the Moon). Nitriles, like those discovered by the current study, may have landed on some of those old asteroids, much as liquid water is postulated to have arrived on Earth.

In addition to protostars and meteorites, nitriles have been discovered in the atmosphere of Saturn’s biggest moon, Titan. To put it another way, it serves as a constant reminder that we are part of a vast cosmic stew that has been simmering for many billions of years. 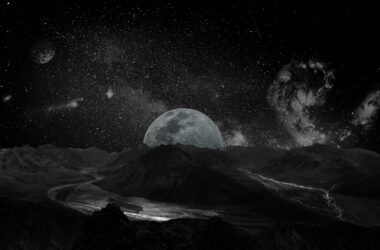