In the fourth season of the beloved series, many of the popular characters are separated before they finally come together at the very end.

This, of course, meant the creators of Stranger Things, the brilliant Duffer Brothers, had to think a little outside the box when it came to selecting filming locations for some of the iconic scenes we all loved watching.

Specifically, finding the season’s primary setting, the town of Lenora Hills, was quite a challenge.

As you may be aware at this point, the Byer family along with Eleven are shown settling in this community supposedly located in California and which features stunning mountains and open streets, seemingly taken right out of E.T.!

Will and El also attend the local Lenora Hills High School, where the super-powered teen is shown having a rather hard time fitting in and is dealing with some nasty bullying.

But is Lenora Hills an actual place in California and can we visit it? Certainly, many fans want to know the answer to this question!

Well, as it turns out, just like Hawkins, Lenora Hills is a fictional place and nothing more.

The scenes there were not filmed in California either but in New Mexico and the real-life high school where some of the scenes were shot is actually called Eldorado High School and located in Albuquerque!

The other two main locations were not true to life either, the Russia portion of the show being shot in Vilnius, Lithuania while the Hawkins scenes were actually filmed in Atlanta, Georgia.

Even though the gang is split, most of the action still takes place in the iconic fictional town of Hawkins where they all come together, in the end, to try and win the fight against the latest villain they dub Vecna (based on their Dungeons and Dragons game, like always.) 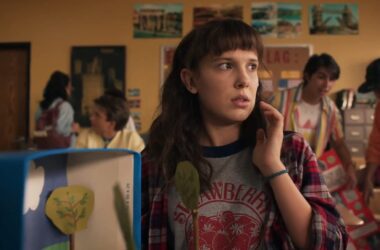 As Robin Buckley in “Stranger Things,” Maya Hawke quickly rose to fame in the entertainment industry. Maya has…